This winter, the water temperature data from December 2011 has good news for overwintering populations of fish and crabs, because the water was much warmer than it was in December 2009 and 2010. The graph below shows water temperatures at the CBIBS Annapolis buoy, with 2011 in red, 2010 in blue, and 2009 in green.

How Does This Compare to Past Years?

How does this variability from year to year in December temperatures compare to fluctuations in past years? Because December is often when temperatures drop to winter levels in this area, the variability seen in the winter of 2010 compared with that in 2011 appears to be within the normal range.

Because CBIBS buoys were only deployed in the past few years, they do not provide continuous water temperature records dating back decades. But data from the National Data Buoy Center buoy at Thomas Point Light just southeast of Annapolis shows that similarly high and low mean temperatures occurred every several years, as shown on this graph.

Data from the three years between 1985 and 2010 with the coldest December water—1989, 1995, and 2002—shows that the temperature decline in those Decembers was much more gradual than it was in 2010. This graph shows the December water temperatures at Thomas Point Light in 1989 (green), 1995 (blue), and 2002 (red). The drop in water temperatures in 2010 (first graph above) is noticeably steeper than any of these three years, especially in the second week of December.

What Will Happen This Year?

What does this warm water mean for fish and crabs this winter? If it continues, it could increase their winter survival. But if there is another sudden cold snap, like the one in December 2010, there could be another fish and crab kill, especially if warm water has delayed their usual winter migrations.

Long-range forecasts for this winter from NOAA Climate Prediction Center indicate there is a 30 to 40% likelihood of above-average temperatures in the Bay watershed through March 15, and forecast average precipitation over that period.

Two previous large winter fish kills—in January 1976 and January 1980—have been attributed to cold water stress, according to the Maryland Department of the Environment (MDE). However, both were before water temperature measurements started at Thomas Point Light. Fish kill data collected by MDE for 1985-2011 showed that while there were some January fish kills in years with colder-than-normal December water temperatures, none of them were as large as the December 2010-January 2011 kill. Other years, even those without colder-than-normal water temperatures, also had winter fish kills attributed to cold water. Rangia clams, originally from Louisiana, also had dieoffs in cold winters, notably in February 1996 after a cold December in 1995. 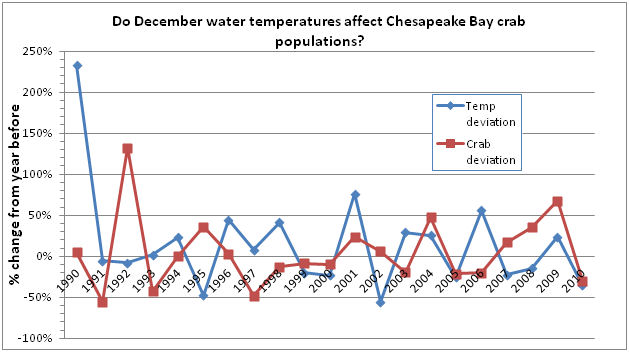