Data in red are more than 12 hours old. 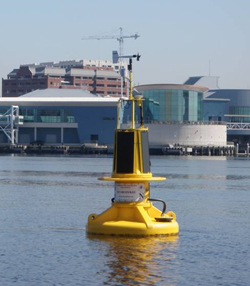 A CBIBS buoy was deployed in the Elizabeth River off Norfolk from Septebmer 28, 2008, through May 14, 2016. Data collected by the buoy while was deployed off Norfolk are available via the Data Download feature.

Captain John Smith and his crew explored the Elizabeth River in September 1608. Captain Smith described the River as a "narrow river...that hath a good channel" and observed that the River's shores were "overgrown with the largest pine and fir trees we ever saw in this country." Those natural features and resources were a magnet for settlers and spurred the growth of Hampton Roads as a commercial and military hub. Shipyards, coal and cargo ports, and the world's largest U.S. Navy base occupy much of the nearby shorelines; upstream, industries dot the Elizabeth River's banks. While heavily industrialized, the River is greatly enjoyed by recreational boaters who can find quiet creeks nearby in which to enjoy woodlands, wetlands, and wildlife. For more information on the area, visit: