Conditions this summer in Chesapeake waters may have provided a good setting for some of the Bay’s iconic species, including striped bass, blue crabs, and oysters. That’s due to average water temperatures, better-than-average area affected by low dissolved oxygen, and above-average salinity.

After every season, NOAA scientists examine data from CBIBS buoys, NOAA satellites, and other sources to track whether overall conditions were similar to—or different from—average. When conditions are different than average, it can affect species that live in the Bay, in both positive and negative ways. 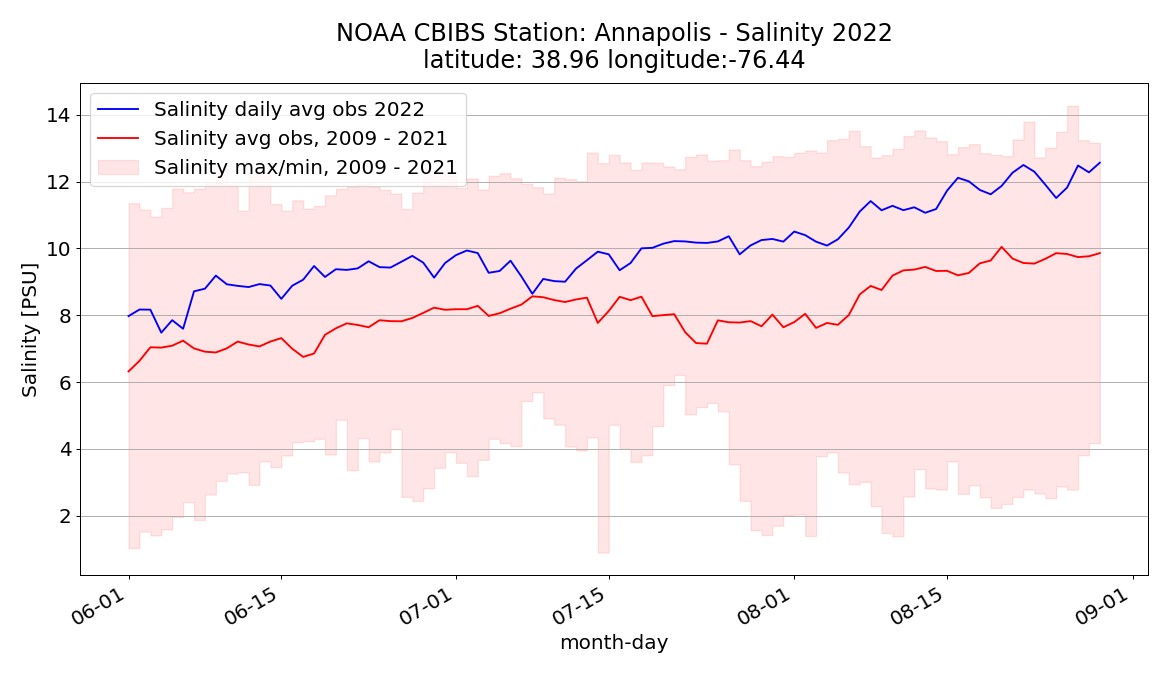 This graph shows salinity levels at the Annapolis CBIBS buoy from June through August 2022. 2022 levels are the blue line; they are higher than the average observed at this location from 2009 through 2021. Higher salinity levels can support more robust oyster reproduction. The full seasonal summary document also includes graphs from the Gooses Reef, Potomac, and York Spit CBIBS locations.

The overall average water temperatures were likely good for species including striped bass. When the water is warmer than average, striped bass are stressed, and they often suffer both increased natural mortality, and die more often even during catch-and-release fishing (because they are already stressed). Warmer-than-average water temperatures are also harmful to eelgrass, which striped bass use for habitat and for nursery areas.

We hear a lot about the “dead zone” in the Bay. This is the volume of water where dissolved oxygen levels are too low to support healthy life—where it is hypoxic. For much of the summer, the Bay’s dissolved oxygen levels were more robust than in recent years. That gives fish and other species more healthy habitat for movement, reproduction, growth, and feeding.

For more information on summer 2022 conditions and how they may have affected living resources in the Chesapeake Bay, see the full summer 2022 scientific seasonal summary.