What Do 2019-20 Winter Water Temps Mean for Spring Fishing? 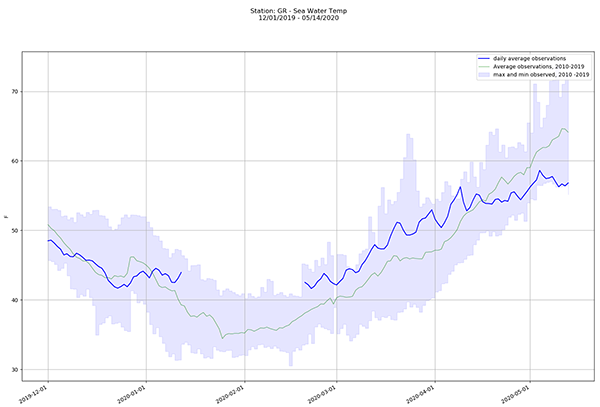 Salinity was also a bit higher than average for parts of the winter. But salinity levels can change quickly if there is a large precipitation event or a few weeks of dry weather. Even the higher salinity is still within the range seen at the Gooses Reef CBIBS location during the same December-April time period since the buoy was deployed back in 2010. 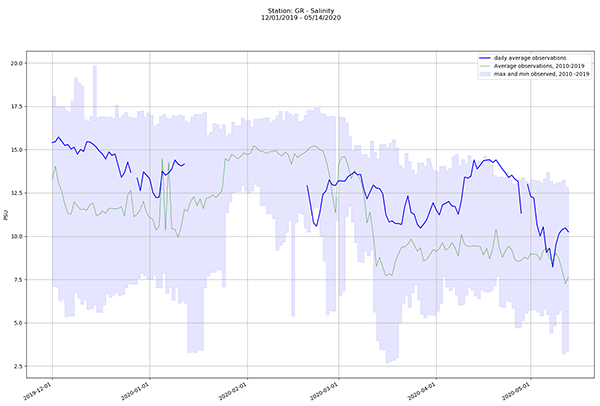 What do slightly warmer water temperatures and slightly higher salinities mean for some of our favorite Bay species, like blue crab and striped bass?

In preparation for winter, blue crabs burrow into the mud at the bottom of the Chesapeake to protect themselves from cold temperatures. But every year, even having taken that safety step, a number will die due to the conditions. How severe the winter is can affect the number that die--called “overwintering mortality.”

Warmer water temperatures over the past winter may have led to fewer deaths in the blue crab population. Science will soon let us know for sure. We will learn more about the health of the blue crab population later in May, when Maryland and Virginia release the results of their annual blue crab winter dredge survey. (UPDATE: Maryland and Virginia released 2019 winter dredge survey results on May 21, 2020.) This survey tracks crab population numbers and makeup (male/female, age) at 1,500 randomly selected sites around the Bay. The samples are taken December-March, so the data were collected before COVID-19 affected researchers’ ability to work together out in the field.

Data from the winter dredge survey, along with past and recent year harvest numbers and other information, will be used by the Chesapeake Bay Stock Assessment Committee as they develop their annual Blue Crab Advisory Report to help states manage  the blue crab fishery.

Each spring, anglers take to the waters of the Chesapeake Bay to catch striped bass--or rockfish--the top recreational sportfish in the Bay. Chesapeake Bay spawning and nursery areas, like the Choptank River, produce most of the East Coast’s migratory striped bass. Delaware River and Hudson River also contribute significantly to the population.

Striped bass migrate up into the Bay’s rivers each spring to spawn, and the timing of when they make that trip--as well as the success of any eggs that are laid--can be affected by water temperature and water flow.

While the graph suggests that salinity has been slightly higher than average and recent water temperatures just above average--and so the population might be affected--we just don’t know how much effect this small difference will have.  Recent studies indicate could negatively affect striped bass. Conditions affecting the rockfish spawn and zooplankton bloom can change quickly. We’ll have to wait for fish stories from our angler friends!