What a winter that was! Challenging weather conditions that started Valentine’s Day weekend have kept the CBIBS team busy. The buoys are generally quite hardy, but ice can damage the sensors, and ice floes can drag the buoys out of position. While the CBIBS team routinely pulls the northernmost (Susquehanna, Patapsco, Upper Potomac) buoys each winter to prevent any ice damage, the winter of 2014-15 took ice challenges to a new level.

A powerful front moved through the mid-Atlantic the evening of February 14, bringing not only a brief but impressive snow squall but also very high sustained winds and frigid temperatures—including gusts to around 50 knots. This resulted in heavy freezing spray accumulating on several of the buoys. The accumulated ice was enough to lean several buoys over to nearly horizontal. Data from buoys was compromised, as a number of sensors stopped functioning, and some communications were lost.

When the crew arrived at the CBIBS Potomac buoy, it was listing severely due to the weight of the accumulated ice.

CBIBS technicians teamed up with partners to access and care for buoys. To get to the Potomac buoy—at the mouth of the river, CBIBS team members went out on February 16 on a 45-foot patrol boat with the crew from the U.S. Coast Guard’s St. Inigoes (Maryland) station. On site, they were able to remove much of the ice from the buoy so that it could once again stand vertically and to remove sensors to prevent further damage. But due to weather conditions, they were unable to remove all the ice and determine any other damage, and buoy communications to shore have not been restored. The team is working to fix the buoy and restore the data feed. 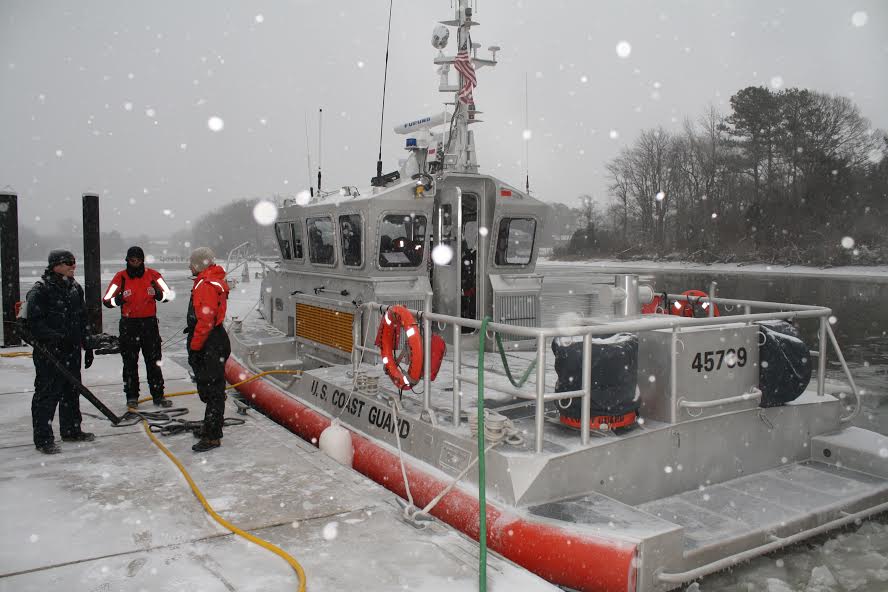 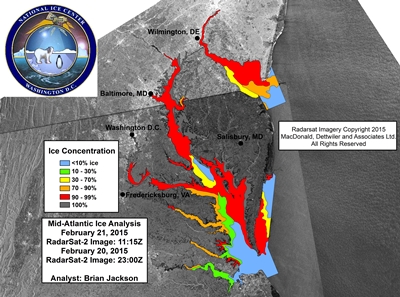 The National Ice Center--operated by the U.S. Navy, U.S. Coast Guard, and NOAA--produced this map of ice coverate on the Chesapeake and Delaware Bays on February 21, 2015.

To reach the CBIBS Annapolis buoy, CBIBS technicians were invited to join the crew on a Maryland Department of Natural Resources icebreaker, the M/V John C. Widener. The buoy location was surrounded in ice, and the team determined that the buoy needed to be removed to ensure its safe keeping. The crew hoisted the buoy aboard the Widener, and later delivered it to the CBIBS team on shore at Naval Support Activity Annapolis on the north shore of the Severn River, where the CBIBS warehouse is located. There, the buoy will be cleaned and refurbished so it is ready for redeployment once the water warms and replacement parts installed. 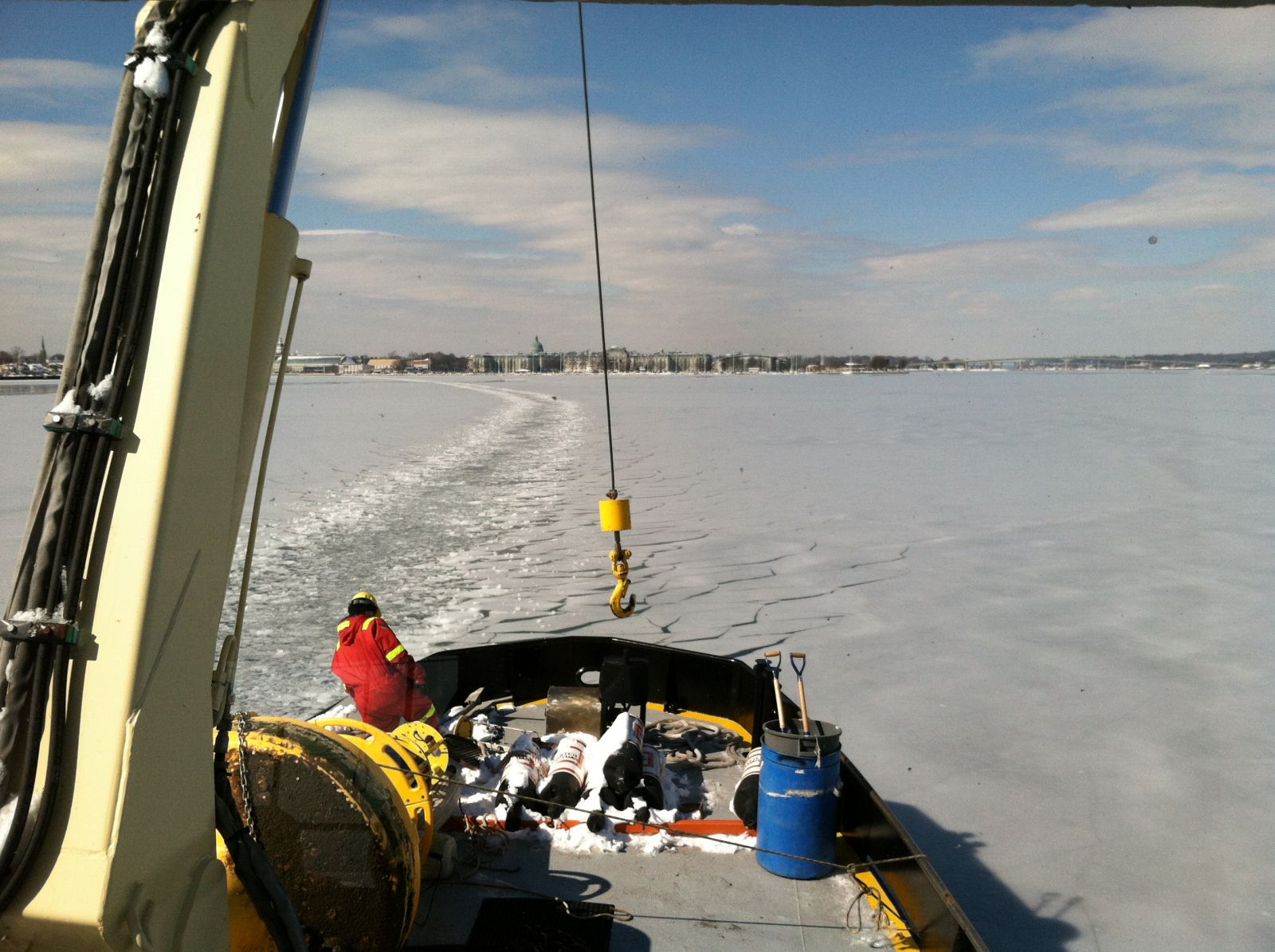 The M/V Widener, with CBIBS buoy on deck, heads back in to Annapolis.

Members of the CBIBS team went out with a charter fishing boat to check on the Gooses Reef buoy. While the amount of ice precluded the charter fishing boat venturing all the way out to the buoy, using binoculars, the team was able to determine that the buoy was on station and safe. It remains there; the buoy team is developing a buoy that will be swapped in at the Gooses Reef location.

The Jamestown buoy, visible from shore, was moved by the ice floes on the river and suffered some damage. The team is working with partners to remove, repair, and redeploy this buoy.

While they had some data gaps, the First Landing, Norfolk, and Stingray Point buoys stood strong over the winter.

And clear evidence that spring is finally here: The CBIBS team partnered with the U.S. Coast Guard to redeploy the Patapsco buoy on March 19. Next up is likely the redeployment of the Susquehanna buoy. Check back at the CBIBS Facebook page for updates. 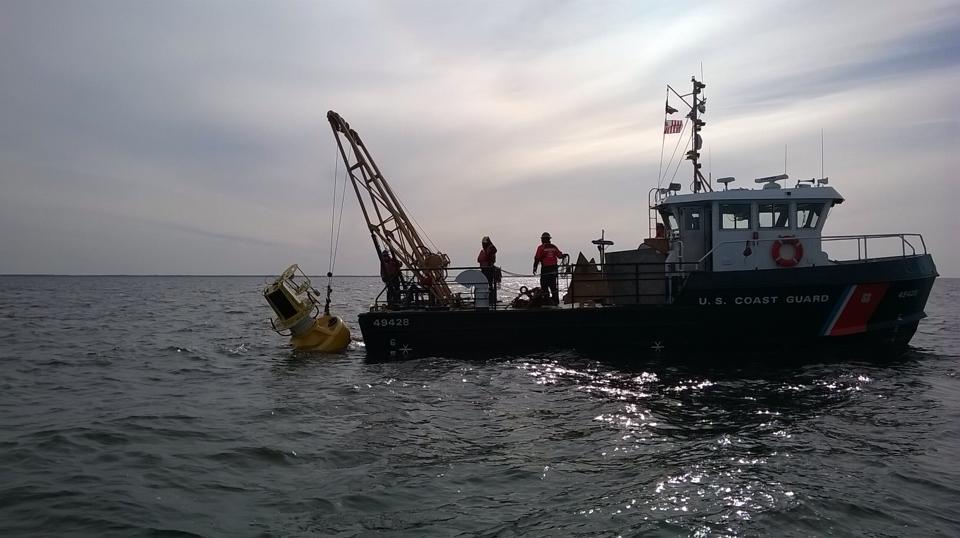