Maintaining CBIBS Water-Quality Monitors: How Do They Do It?

CBIBS water-quality monitors play an important role in tracking the health of the Chesapeake Bay. They observe water temperature, salinity, conductivity, dissolved oxygen, chlorophyll-a, and turbidity, and relay that data through the CBIBS buoys back to boaters, scientists, students, and others—every hour, every day. 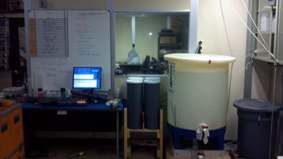 But over time, these monitors can become fouled with sediment and living organisms from being in the water, and this can lead to data drift. To prevent this, CBIBS water-quality monitors are swapped and recalibrated around every four to six weeks. How does NOAA accomplish this? Here is a step by step look at the process that technicians follow to swap these water-quality monitors.

1. Pre-Replacement Calibration: Before water-quality monitors (WQMs) are installed in CBIBS buoys, they are calibrated for accuracy. This photo shows the calibration lab. A NOAA technician places the WQM in the large white tank that is used to calibrate for water temperature, conductivity, salinity, and dissolved oxygen.  The tank is kept at a salinity of about 22 ppt and near 100% dissolved oxygen saturation. A high-quality water temperature, conductivity, 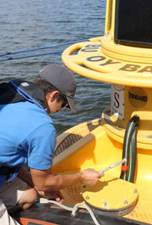 2. Getting to the Buoy: High waves and wind can make WQM swaps challenging, so the CBIBS team tracks the weather forecast carefully. After determining an acceptable weather window, technicians board a rigid hulled inflatable boat (RHIB), and drive the boat up to several miles to reach the buoy. The RHIB’s soft sides allow the boat to ride right next to the buoy without hurting the buoy or the boat. Once at the buoy, the team ties RHIB to the handles on the buoy (on the platform where the 877-BUOY-BAY number is displayed). Once the RHIB is tied, both bow and stern, to the buoy, the team can proceed with the WQM swap.and salinity sensor and a high-quality dissolved oxygen sensor are placed in the same tank. By doing side-by-side measurements and comparing values with the other sensors, the WQM is tuned to read correct water temperature, conductivity, salinity, and dissolved oxygen values. Next, the WQM is placed in a blank distilled water standard, a chlorophyll-a standard, and a turbidity standard to calibrate for the chlorophyll and turbidity parameters. The technician then organizes the calibration data for each WQM on a computer spreadsheet for future review. The WQM is now ready to be deployed on a CBIBS buoy. 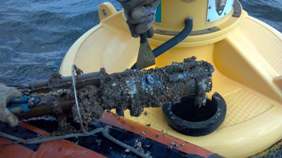 3. Removing the WQM: The task of removing the WQM is easy in concept, but can be challenging in rough conditions. First, the bolts that hold the WQM in place are removed by a technician standing on board the RHIB but leaning out over the buoy. Because equipment can easily be dropped and lost in the water, replacements are always kept on board the RHIB. After the bolts are removed, the cage that holds the WQM is pulled up. Often the cage must be twisted to fit past the buoy handles. Once the WQM is out of the water, the data cable is detached from the WQM, and the zip ties holding the WQM in its cage are removed. Often, the WQM has substantial marine growth, which is cleaned off before the WQM is taken back to the warehouse. The cage is also cleaned before the new WQM. 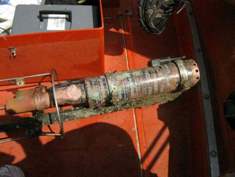 5. Confirmation of Data Transmission: After the WQM is back in the water, technicians keep the RHIB tied up to the buoy and wait for the next scheduled water-quality update. While waiting, the team inspects and cleans other parts of the buoy, especially other in-water sensors such as the current sensor. If the data transmits successfully, the RHIB unties from the buoy and heads back to shore. However, if the data does not transmit, the CBIBS team troubleshoots to determine the problem, which can often be a damaged data cable.

6. Replacing the Data Cable: Depending on the level of fouling, the data cable for the WQM can last anywhere from a few months to several years. If a data cable needs to be replaced, the new cable is strung through the buoy and wired to the controller inside the buoy. Technicians then confirm that data transmits. 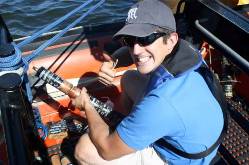 7. Post-Replacement Calibration: After a WQM is removed and cleaned, the same calibration process used on the replacement WQM is used on the returning WQM. Values compared to the standards are then recorded and stored for quality assessment of the WQM data during its deployment. If the WQM is damaged or is reading extremely bad values, it is sent back to the manufacturer for repair.

NOAA is now collaborating with both the Maryland Department of Natural Resources and the Virginia Institute of Marine Sciences; those organizations are helping NOAA with routine swaps of WQMs. NOAA continues to perform the calibration process to ensure consistency of data.