What Does Fall Mean for Fishing?

Fall can be a delightful time on the Chesapeake. The water is still fairly warm, and fish are on the move, making for some enjoyable angling. But what changes, caused by changing seasons or weather events, are affecting the Bay—and how might those changes influence how fish move around the Chesapeake?

Last year brought record rainfall—and resulting very low salinity—to the Bay. But since summer 2019 started, much of the Bay watershed has received low amounts of rain. As the graph below shows, we have moved from having fresher-than-average water at the CBIBS Gooses Reef buoy to higher-salinity water in just a few short months. 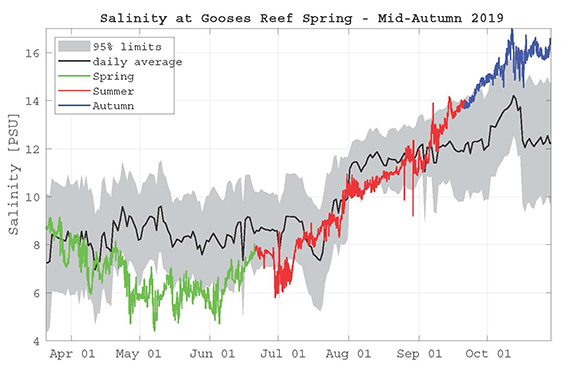 What does this mean for fish and crabs in the Bay? Generally, as the graph shows, salinity increases over the course of the summer. Because the watershed gets less rain in summer than in spring, less fresh water enters the Bay in the form of runoff from the tributaries. That trend holds impressively true this year, and this can affect species distributions. For example, many types of fish and crabs are more likely to move farther up the Bay and/or tributaries as higher-salinity waters push farther into the estuary. Coastal species are also more likely to be caught in the Bay in the fall, particularly in the lower portion near the mouth of the Chesapeake where the salinity of the water is similar to that of the coastal waters.

In fall, striped bass typically migrate down the coast as the Atlantic waters cool. They are more likely to enter the warmer waters of the Bay to feed on anchovy and menhaden during this migration when the salinity is higher. These baitfish are typically an easier target in the fall when waters are cooling because the fall turnover replenishes the water column with nutrients and plankton prey, so they school to take advantage of this food source.

If you’re headed out fishing, keep an eye on water temperature as well, as this can also play a large role in fish movements and distribution, as different species migrate to spend winter months in warmer waters. Further complicating the picture, some species of algae thrive in high salinity, so species that were suppressed this spring with all the rain could make a comeback and potentially reduce fish habitat as well (due to poor water quality). Heavy rainfall increases runoff of excess nutrients into the Bay--these nutrients then fuel the growth of algae. When algae die and decompose, the decomposition process uses oxygen, leading to low oxygen levels in the Bay. Similarly, oyster diseases tend to thrive in higher salinity so there could be an increase in oyster mortality--but again, this depends on how high the salinity actually is and on water temperature and other factors. Each year, the Maryland Department of Natural Resources completes a fall oyster survey, which includes information on disease levels.

The Bay is a complicated place for fish, crab, and anglers alike! Enjoy your day on the water—and be sure to track your local forecast and monitor conditions on the Bay to make it a safe one.