The dog days of summer are here—but we’re thinking about fish! Summertime is a great time of year to relax on the water with friends to enjoy fishing for some of the Bay’s iconic species, like striped bass (rockfish). However, there are some times that fishing for striped bass are better than others. 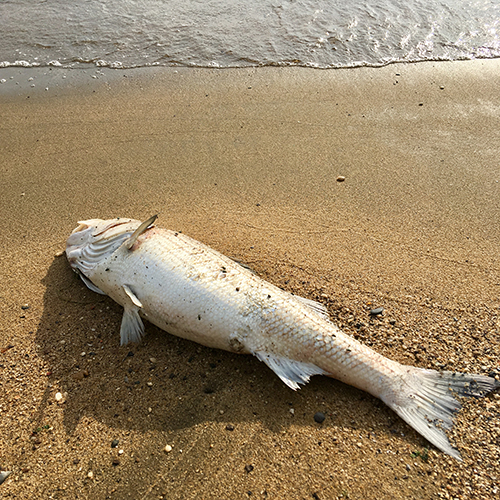 A dead striped bass on a beach in Annapolis, Maryland. Fish die for many reasons, including inability to find appropriate water column habitat where they can survive.

Striped bass require at least 5 mg/L of dissolved oxygen; if “DO” drops below that level, adult rockfish will try to swim to areas that have sufficient DO. This often means squeezing more fish into the waters near the surface that may have higher DO. As fish density in that area increases, so too can disease transmission among fish. Juvenile striped bass reduce their activity and food consumption when faced with low DO, so they don’t grow as quickly as they would in healthy waters.

The NOAA Chesapeake Bay Office field team is tracking conditions throughout the water column at a site near the NOAA CBIBS Gooses Reef buoy this summer. Data in the graph below are from a location southeast of the Gooses Reef buoy in the navigation channel to the Choptank River, south of the Sharps Island Light and west of the Little Choptank River with 105 feet of water depth. Using a “CTD cast,” which observes conductivity, temperature, and pressure (depth) as it is lowered, the team gets data on conditions from the water’s surface to the Bay’s bottom at that location. CBIBS monitor these parameters at about 0.5 meter below the Bay’s surface (and intermittently at the bottom at the Gooses Reef location). 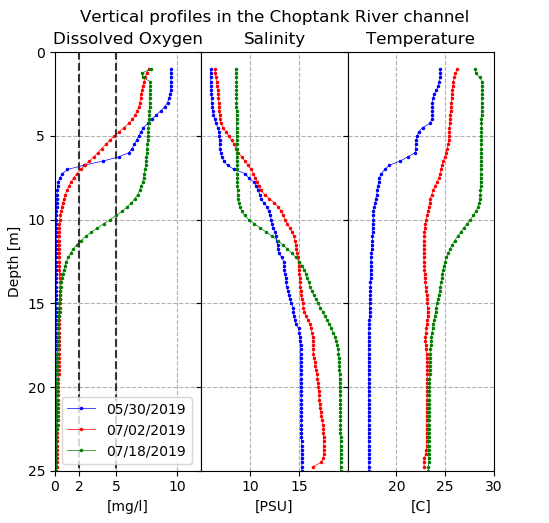 Dissolved oxygen, salinity, and temperature throughout the entire depth of the water column at a point near the NOAA CBIBS Gooses Reef buoy. Data were acquired on three dates in 2019.

The graphs show how dramatically conditions can change from surface to bottom waters, and how they can differ from month to month. In the dissolved oxygen graph, two notable DO levels are noted: 5 mg/L (striped bass require at least this amount of DO) and 2 mg/L (water below this level is considered “hypoxic”—and cannot support most aquatic organisms). The graph shows that a significant amount of the water column is incapable of supporting fish, crabs, and other Bay life due to a lack of DO.

Interestingly, at the end of May 2019, DO dropped to 5 mg/L at roughly 5 meters (roughly 16.5 feet) of water depth—but at about 10 meters (33.75 feet) in mid-July. This runs counter to what one might expect—that summer conditions would result in lower DO readings. But this location started out the summer with unusually low salinity (second column graph) resulting from high rainfall last year and early this year. Having low salinity water near the surface made it difficult for the water to mix up and down the water column. As 2019 has progressed, things have gotten a bit drier around the Chesapeake, leading to salinity levels approaching normal. That enables mixing of the water, and means more oxygen flowing into the Bay at lower levels from the ocean. So while there is still a high hypoxic volume, it has improved slightly since May.

An added challenge—the waters near the surface, which likely have higher DO, are often warmer than waters further down in the water column, which have less DO. So while they swim further up in the water to find DO, fish may encounter water warmer than they can handle, creating a habitat “squeeze” where appropriate water is hard to find, as striped bass avoid water above 84 degrees F. 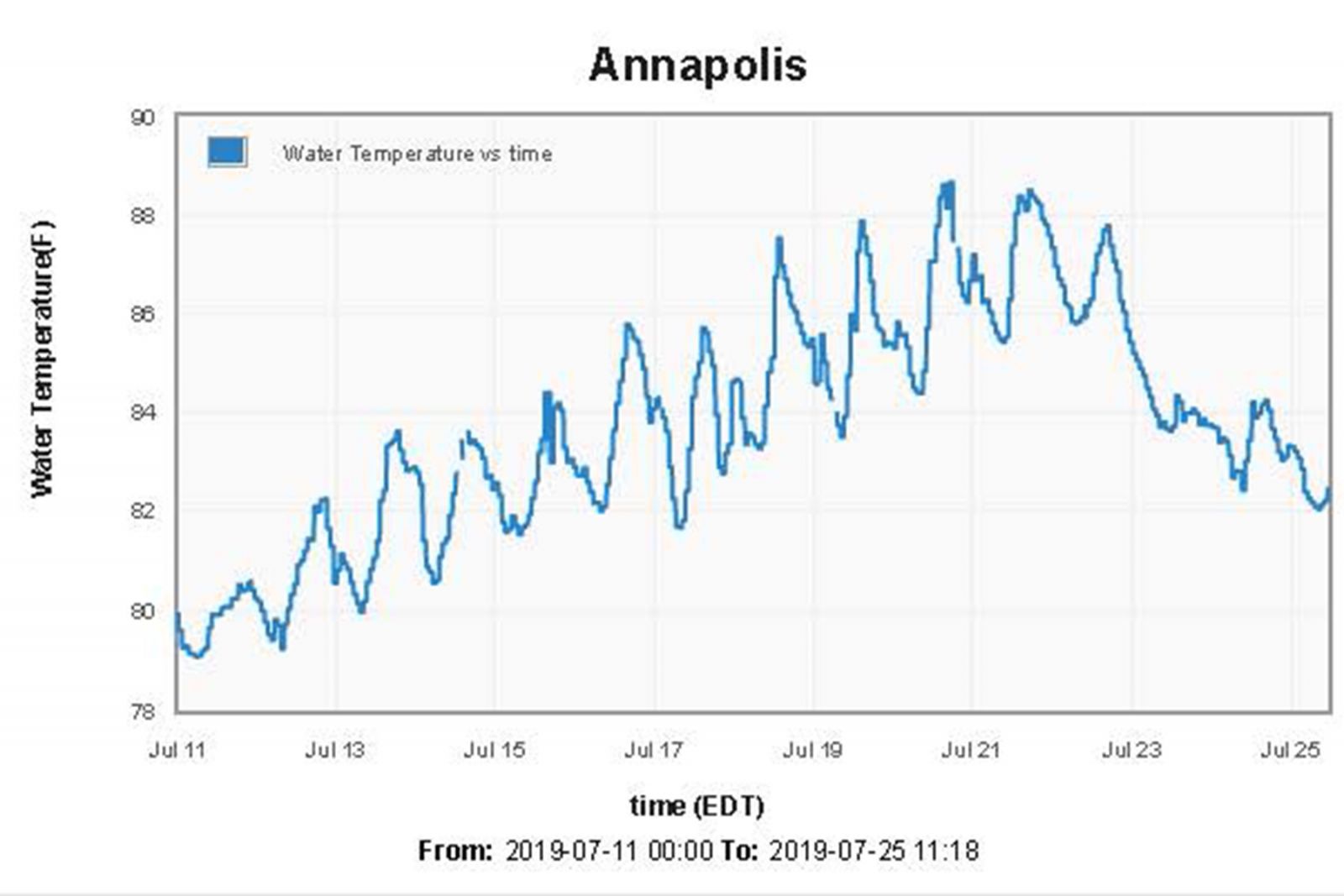 Water temperatures near the surface, here observed at the CBIBS Annapolis buoy, often hit close to 90 degrees in the peak of summer.

Many anglers practice catch-and-release fishing for rockfish as well as other species, intended to provide a challenge but then return the fish to the water. However, if not done properly and under the right conditions, fish that are caught and then released may still die. Mortality from catch-and-release fishing is a significant concern for the health of the Bay’s striped bass population. According to the latest stock assessment, 9% of live releases of striped bass result in mortality—likely higher in the heat of summer. This is of particular concern right now as the Atlantic States Marine Fisheries Commission recently declared that striped bass are overfished.

In the mid-Chesapeake Bay, water temperatures are approaching 90 degrees F, so the fish are already significantly stressed. Add in being yanked from the water and handled by humans, and it’s a big challenge for fish. So what’s an angler to do? To heighten awareness of the challenges fish face—and to give fishermen more information on how to fish responsibly—the Maryland Department of Natural Resources recently launched a Striped Bass Fishing Advisory Forecast. Color-coded forecasts (green, yellow, red like a stoplight) indicate forecast conditions and guide anglers on whether it is appropriate to target striped bass. This new information does not change any regulations; it is simply more information that anglers can use to reduce dead discards. It’s a great resource for anglers who want to ensure a healthy future for some of our favorite fish.

Striped bass are an iconic species in the Chesapeake—taking care to know conditions around and in the Bay and tracking forecasts and advice from experts can help our treasured rockfish.