Ah, spring. Temperatures are rising, and winter’s grey skies and precipitation yield to generally more sunshine. That also means that water temperatures in the Chesapeake Bay and its tributaries are on the rise as well, indicating to many living resources that it’s time to be on the move, and in some cases, to reproduce. Salinity levels—a measure of how salty Bay waters are—often change this time of year, too.
While much of the annual pattern for the Bay’s fish, crabs, and other critters is routine, each year is unique. Some springs follow a cold (or warm) winter; others are very rainy (or dry). 2018 was a very rainy year, leading to frequent flooding—resulting in increased freshwater input to creeks, streams, and rivers, and on into the Bay, lowering salinity levels. Salinity, measured in practical salinity units (PSUs), ranges from 0 for fresh water to about 35 in the salty ocean. The Chesapeake Bay’s geography, from the mouths of freshwater rivers to where the Bay meets the Atlantic Ocean, includes a wide range of salinities. 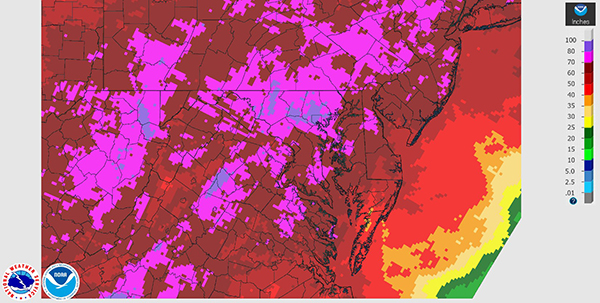 Total rainfall in calendar year 2018—shown here in a graphic from the National Weather Service—led to low salinity in many areas of the Bay and its tributaries.
In general, salinity at any given spot in the Bay follows a pattern based on rainfall in the area, so that the waters are less salty—lower PSUs—from fall through spring when the Chesapeake watershed generally experiences higher precipitation. Over the summer, salinity slowly creeps up as rainfall drops.
Scientists and resource managers discussed observations of what 2018’s low salinity could mean for the Bay and its critters in December 2018 at a meeting of the Chesapeake Bay Program’s Sustainable Fisheries Goal Implementation Team. Based on early observations, from summer to fall of 2018, oysters experienced some high-mortality events in the upper Potomac River and slower growth in other parts of the Bay. Oysters also benefitted from low levels of disease, which was spread out by the surge of fresh water. Blue crabs and other mobile species generally migrated to avoid low-salinity areas.
So far in 2019, after experiencing persistent snow and rain around the Chesapeake Bay watershed throughout the winter following a wet 2018, salinity levels are below average. This graph shows salinity at the NOAA CBIBS Stingray Point buoy from a few recent years (2019 in red, starting in late February 2019 when the Stingray Point buoy was redeployed), as well as the average from 2011 through 2018 (thicker black line). While on average, salinity at the Stingray Point buoy ranges around 15 or 16 PSU in March, salinity there this year is 8-10 PSU. 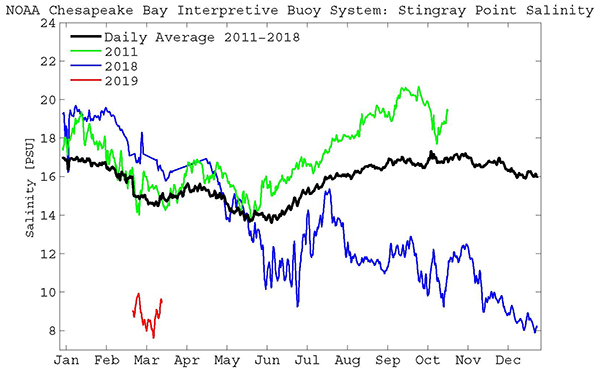 Salinity can vary widely from year to year, as shown by this data from the NOAA CBIBS Stingray Point buoy.
How might current conditions affect living resources in coming months?
The effects of 2018-19 low salinity levels will not be well known until scientists monitor fish population levels using annual surveys. In the meantime, scientists will have to wait and see what weather this year’s spring brings, which will continue to affect the Bay and its living resources.