What a Delightful Summer It Was

As summer turns to fall across the Chesapeake watershed, many around the Bay recall pleasant times outdoors around the Bay in mostly comfortable summer temperatures, with no super-hot stretches of weather, and seemingly few days above 90 degrees. But do these personal recollections match data tracked by CBIBS buoys?

The graph below shows the average water temperatures at the 10 CBIBS buoys for May, June, July, and August 2014. A few interesting trends can be seen: While the Susquehanna CBIBS buoy starts out as the coldest surface temperature, in July it is one of the warmest locations. This is likely because the Susquehanna buoy is in relatively shallow water, on the northwestern edge of the Susquehanna Flats, where depths range from 1 to 5 feet. And the First Landing buoy—while it is the southernmost buoy—remains one of the coolest locations thanks to ocean circulation delivering cooler water.

And how do this year’s temperatures stack up against previous years?

Data from the Annapolis CBIBS buoy, featured in the graph below, indicate that indeed, for the most part, water temperatures were below the mean from recent years. The black line on the graph describes the mean daily temperatures since the Annapolis buoy was first deployed in 2009; the red is the daily average from 2014.

But, while it tracks water temperature every hour, 24/7, the Annapolis CBIBS buoy is just one location in the Bay. The picture may be different at other locations, as they experience different weather conditions. Here’s a look at the same graph, but for the Potomac CBIBS buoy off Point Lookout:

Interestingly, both the Annapolis and Potomac CBIBS buoys show a jump in water temperature in early September—the result of the warm spell that started in late August and carried through the first week of September.

Taking a broader look at the Chesapeake Bay, we turn to our colleagues at NOAA Satellites, who collaborate with other agencies and use remote-sensing technology to track, among many other things, surface water temperatures. This graph shows weekly average water temperatures—and here again, the 2014 (red line) shows temperatures mostly below the 2003-2013 weekly mean temperatures (blue line). 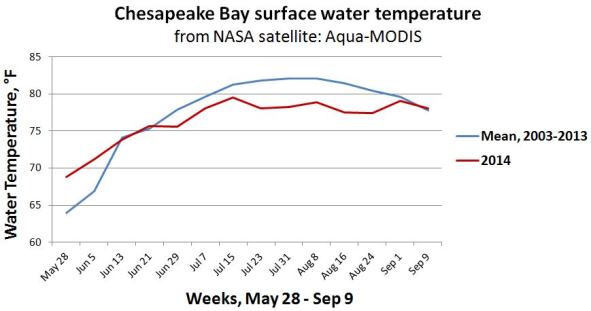 So…how did this happen? A look at air temperature—here at the Annapolis CBIBS buoy—can give us a clue, and illustrate some principles of how air, water, and weather interact:

Monthly averages of air temperatures around the Bay, much like the monthly water temperature averages, show some fairly predictable trends. The graph below indicates that the Susquehanna buoy—the furthest north CBIBS location—was overall the coolest, while Norfolk—the furthest south, and in a fairly urban setting—was the warmest. While First Landing is also quite far south, air and water temperatures there are influenced by proximity to ocean shelf waters.