How Clear Is the Water? Scientists Are Looking in to It

Many Chesapeake-area residents have noticed very clear water in the Bay in recent weeks, and scientists are working together to further explore this topic. While images from some Bay tributaries show terrific visibility in the water—being able to see the bottom in 10 feet of water, for example—scientists want to validate the phenomenon using data from a variety of sources.

Scientists from NOAA and the Maryland Department of Natural Resources are poring through information in order to develop a report that will be delivered to the Chesapeake Bay Program’s Scientific, Technical Assessment, and Reporting Team early in 2016. Among the data sources they will investigate are buoys and instruments that track water quality (including the Chesapeake Bay Interpretive Buoy System [CBIBS]) and Maryland DNR’s Eyes on the Bay network), and observations tracked by satellite.

NOAA CBIBS buoys track water quality on a continuous basis at 10 points around the Bay; these locations may or may not match up with locations where the very clear water has been noted. In addition, the buoys’ water-quality sensors are just below the surface of the water—so they are not able to detect what the water clarity is like throughout the entire water column.

Water clarity generally improves as water cools during fall, as there is, for example, less chlorophyll in the water. But other dynamics—like rainfall amounts around the Chesapeake watershed, and wind strength and patterns—can greatly affect how much sediment is suspended in Bay waters.  These suspended materials (including algae and sediment) contribute to water cloudiness (turbidity).

A quick peek at observations at two CBIBS buoys from November 2013, 2014, and 2015 shows some differences in turbidity. While the surface waters at the Annapolis buoy seem to be less turbid in 2015 than in previous years, at the Jamestown buoy, the opposite seems to be true. 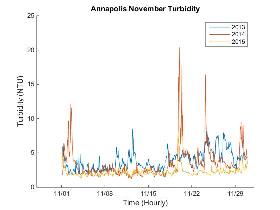 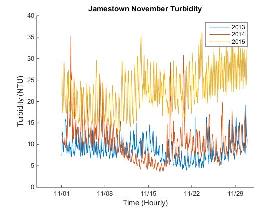 Differences like this—where conditions vary from point to point around the Bay—can also be seen using satellite data. The maps below, from the NOAA Satellite and Information Service, show in blue where the less-turbid (clearer) surface waters were observed. The map on the left shows the average turbidity in the Bay for the months of October 2010-2014. The map on the right shows the monthly average for October 2015—which shows that it was clearer than the average of the previous five years for most regions of the Bay. 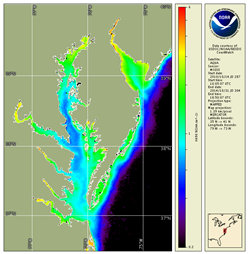 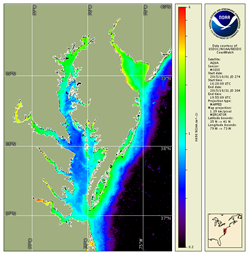 Clearly (!), this is a very interesting occurrence in the Bay, and citizens and scientists around the Bay look forward to learning more about the clearer water when the report is released early in 2016. The CBIBS team will contribute data and analysis to the effort, and we’ll post a link to the report once it is finalized. Improvement in water clarity can have multiple benefits, including the ability of sunlight to reach the bottom and support growth of submerged grasses. Scientists look forward to better understanding whether this phenomenon is widespread and whether it will last!