Here in much of the Chesapeake Bay watershed, 2018 has been a bit on the damp side—to put it lightly. The area has experienced higher-than-average rainfall, leading to record amounts of water flowing off the land into the Bay.

We know what all that rain means for people—traffic-filled commutes that take longer, grumpy kids who want to play outside, rescheduled baseball games, and uncooperative vegetable gardens. But what does it mean for the Bay—and the critters who live in it?

One of the main ways that significant amounts of direct rainfall and increased freshwater flow from the Bay’s tributaries can affect the Chesapeake is by lowering the salinity level of the Bay. Salinity, measured in practical salinity units (PSUs), ranges from 0 for fresh water to about 35 in the ocean. The Chesapeake Bay’s geography takes it from the mouths of freshwater rivers to where the Bay meets the Atlantic Ocean, so it includes a wide range of salinities.

Salinity at a given location can vary greatly, too. Over the course of the year, salinity often follows a pattern based on rainfall in the area, so that the waters are less salty—lower PSUs—from fall through spring when the Chesapeake watershed generally experiences higher precipitation. Over the summer, salinity slowly creeps up as rainfall drops.

But some years are quite different. The following graphs show salinity at the Annapolis and Stingray Point CBIBS buoys from May through September, highlighting the average from 2011 through 2018 and a few notable years. On these graphs, the heavy black line shows the average salinity off Annapolis from 2011-18. It’s interesting to track a dry year—2016—and see how salinity was higher than average, and to see what heavy rainfall in 2011 (a wet spring followed by a drier summer followed by tropical systems Irene and Lee in the fall) and 2018 (wet May, drier June, very wet July followed by Florence in September) do to salinity levels. 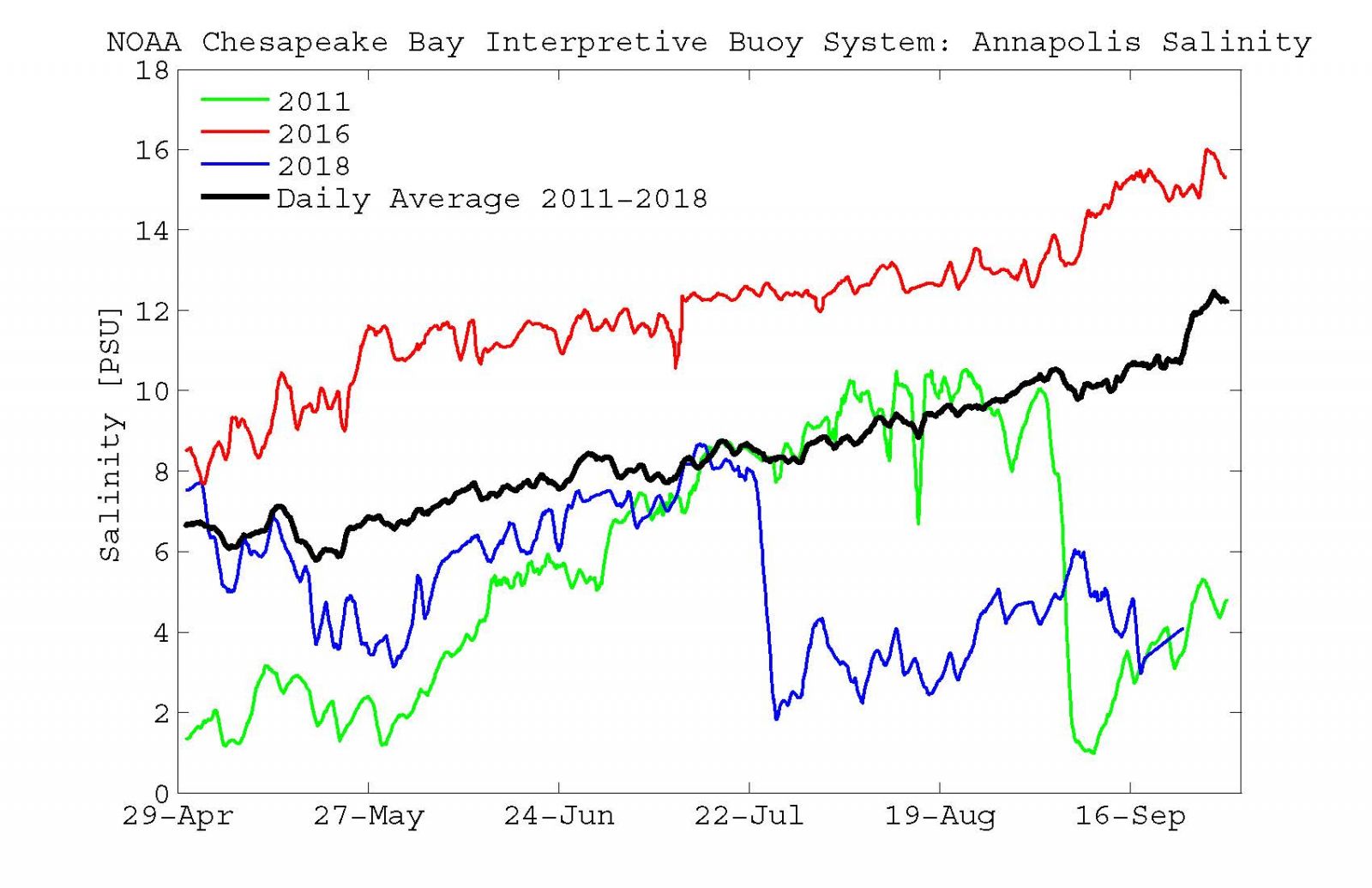 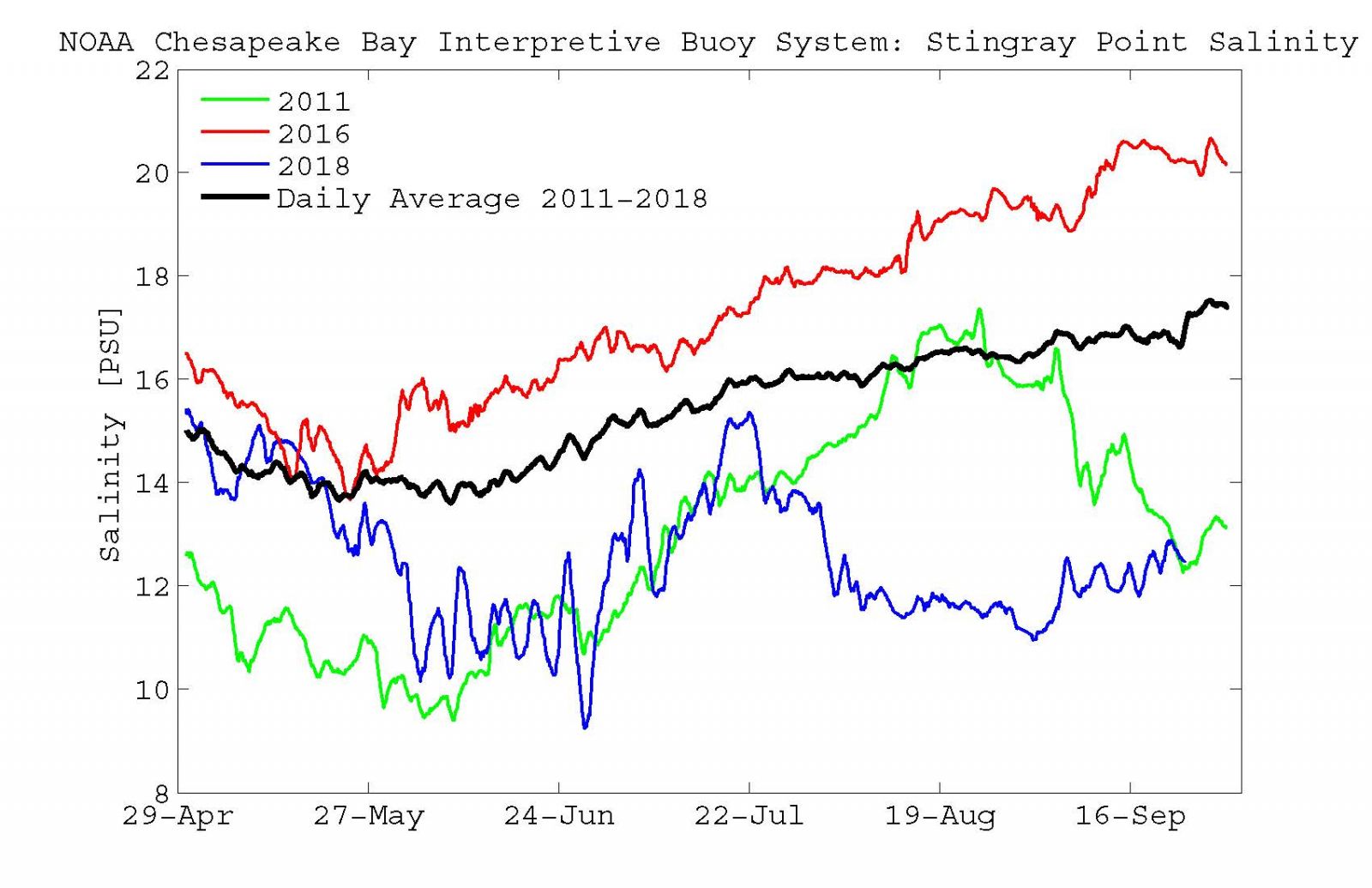 Approximately 40% of the freshwater flow into the Chesapeake Bay comes via the Susquehanna River. When the Susquehanna watershed, primarily in Pennsylvania and New York, gets a lot of rain, the Chesapeake Bay gets a lot of rainwater and runoff. The Conowingo Dam, about 10 miles upstream from where the Susquehanna meets the Chesapeake, provides electricity generated by hydroelectric power. Sometimes, when the water level behind the dam gets too high, gates on the dam must be opened to increase flow in order to relieve pressure on the dam. When that happens, freshwater flow to the upper Chesapeake can increase significantly, lowering salinity. In the following graph, gate openings are indicated by increased flow from the Conowingo—leading to lower salinity at Annapolis and Stingray Point CBIBS buoys. 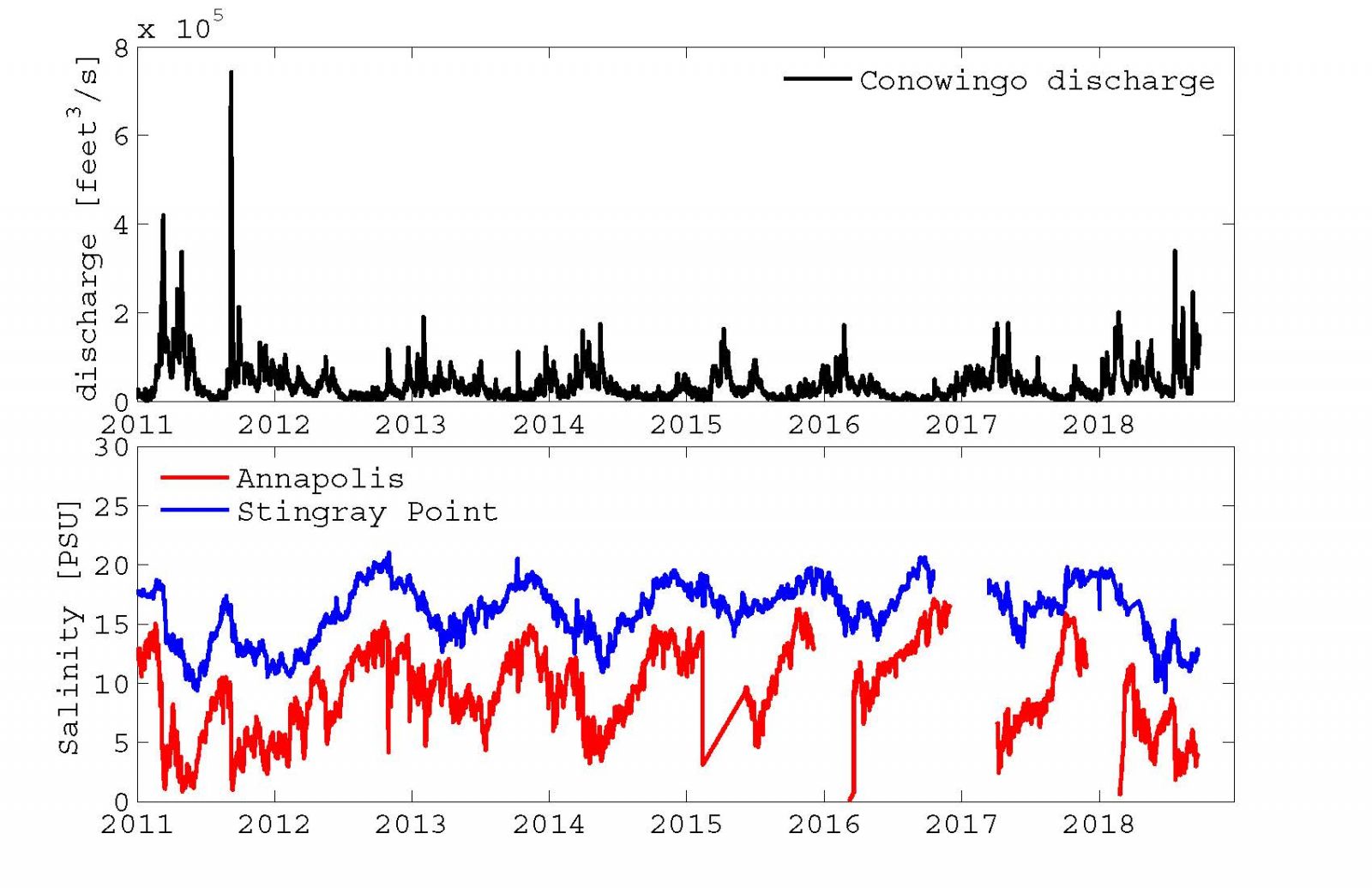 With so many questions remaining, scientists are eager to dig in to data. The Chesapeake Bay Program’s Sustainable Fisheries Goal Implementation Team plans to focus on the topic at its December meeting, giving Team members some time to analyze data before they meet in person to discuss potential effects of this rainy year on the Bay’s living resources.